Home > Case Studies > I Work from Home as a Graphic Designer: A Case Study 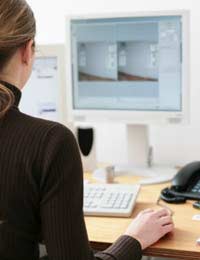 With an increasingly skills-based economy there are many professions which can be done just as effectively, and arguably more effectively, from a home office. Graphic Design is a case in point. When Jan Borzymowski arrived in the UK after working all over Europe, he decided to keep costs down by working from home rather than renting office space.

The tools of his trade are fairly simple: a laptop with the relevant design software and a Wi-Fi connection. End of story. Because his design is a creative process it means he can work anywhere he wants – in the garden, on the roof, in the kitchen with a cup of coffee…

“Graphic design is a creative process, and having trained as an artist in Poland, I recognise the importance of that. Sometimes an office environment is not the best one for triggering creative ideas, whereas being in a home environment really works for me,” says Jan.

It also means the simple things that make up living in a Somerset village can be appreciated, and that is something that is particularly important for someone who aims to get as much as possible from his time in the UK. Add to that the fact his wife Veronica is a highly-skilled designer, too, and you can see why homeworking was a recipe for success.

A New Way to Network

What’s particularly interesting about the story of his company is the way that homeworking has enabled him to generate local business. It totally contradicts one of the myths about homeworking – namely, that you aren’t in a business environment so you can’t generate leads.

Of course it helps that the nature of modern business means Dock 93’s core-expertise in web design provides a vital service. By taking an active part in village life Jan has been able to leverage that and, quite literally, think local. That brings us back to where we started: in a skills-based economy more and more people work from home either all or part of the time – in other words, the village pub is a networking hub.

Recently Jan has built sites for architects who walk their dogs past his house, for wine merchants he met while grabbing some lunch, and even for the local riding for the disabled group.

“Now I’m working on a cutting edge design project for an investment bank whose boss happens to live almost next door! It simply came up when we were chatting and the next thing was that the project was a green light!”

An ancillary benefit of finding clients in this, rather organic, way is that you can pop round to update them on progress.

“I began by attending organised networking events, but found many of them didn’t deliver new business. What they did do was to open my eyes to the fact that ‘networking’ is something I can do on a daily basis, with the extra time, and the extra bounce homeworking gives me.”

Perhaps his last point is the most important point of all. The better work life balance can give homeworkers the very ‘bounce’ which energy-sapping commutes and dreary office environments can take away. Because Jan’s focus is on productivity, rather than office hours, he can find he has finished by lunchtime, and then he feels good and goes for a walk and bumps into someone else who has a project. “Well, not always but sometimes!” he adds Although it’s not the silver bullet it seems that, especially if your business involves creative input, homeworking can be a real boost.